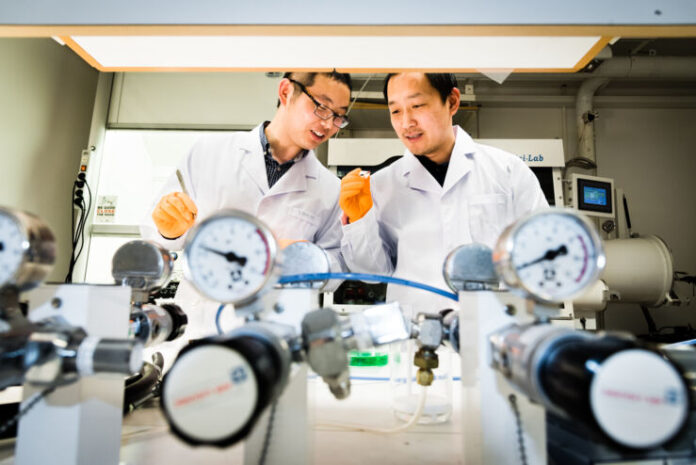 Feng Gao, appointed professor at LiU in the spring of 2020, has climbed rapidly up the research career ladder, from China, via the UK to Linköping. Driven by curiosity, a desire to work in a field that is of real benefit, and a wish to support promising young researchers.

His promise as a researcher was clear from an early age, and he has been awarded an abundance of research grants. He came to Sweden and LiU to work with Olle Inganäs, world-renowned professor in organic electronics. Feng Gao has specialised in semiconducting organics and perovskites for use in solar cells, light-emitting diodes, and optical communications.

From Cambridge to LiU

Feng Gao met perovskites early in his career and they became the topic of his Master’s thesis at Nanjing University. He applied for research studentships in both the US and Europe, and was offered a place at the University of Cambridge, working on organic solar cells, in a group led by a pioneer in the field of organic electronics, Professor Richard Friend.

After finishing his PhD at Cambridge Feng Gao moved to LiU at the beginning of 2012, working with Olle Inganäs. In the autumn of the same year, Feng Gao was awarded a Marie Skłodowska-Curie fellowship, with Olle Inganäs as the host scientist. This fellowship gave Feng Gao research funding for two years in the Division for Biomolecular and Organic Electronics. 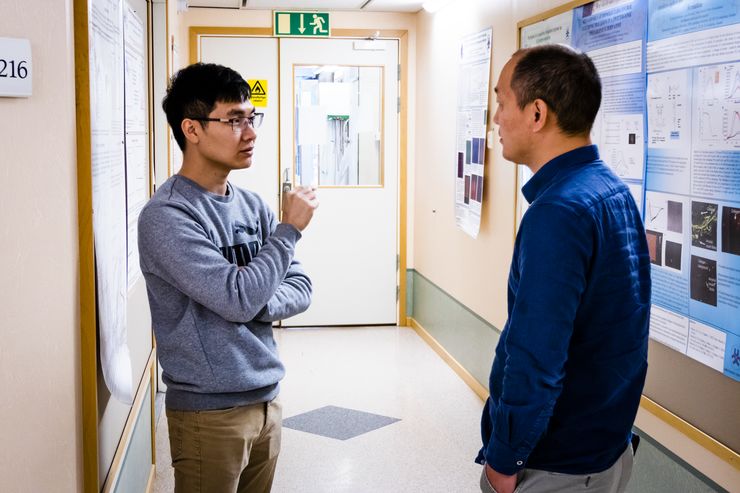 Chunxiong Bao and Feng Gao.  Thor Balkhed
“During the final year of the fellowship I was also awarded an International Career Grant from the Swedish Research Council. That was a grant to enable young researchers to collaborate with leading researchers abroad. I’m very grateful that I had the opportunity to collaborate with Professor Henry Snaith, a famous pioneer in the field of perovskite solar cells at the University of Oxford”, says Feng Gao.

Once back in LiU with a full-time position, he decided to switch the focus of his research.
“Perovskite-based solar cells is a crowded area, and a small research group like mine would find it difficult to compete. I was keen to find an area of my own where my research could benefit society. I started to look instead at perovskite-based light-emitting diodes.”

Feng Gao applied for and was awarded a Starting Grant from the European Research Council, ERC, to work on this new field.

Since then, he has also been awarded several major research grants and awards from Swedish research foundations, on both perovskites and organics. These research grants and awards bring millions of Swedish crowns every year, money that is being used to dig ever deeper into the mysteries of these new materials and devices. The growing research group is highly productive, and publishes many articles in highly ranked journals such as Nature, Nature Photonics, Nature Energy, Nature Materials, Nature Communications, Advanced Materials and many others. The articles are often the result of collaboration with scientists from different parts of the world. The subjects they deal with are light-emitting diodes, solar cells, and optical communication. 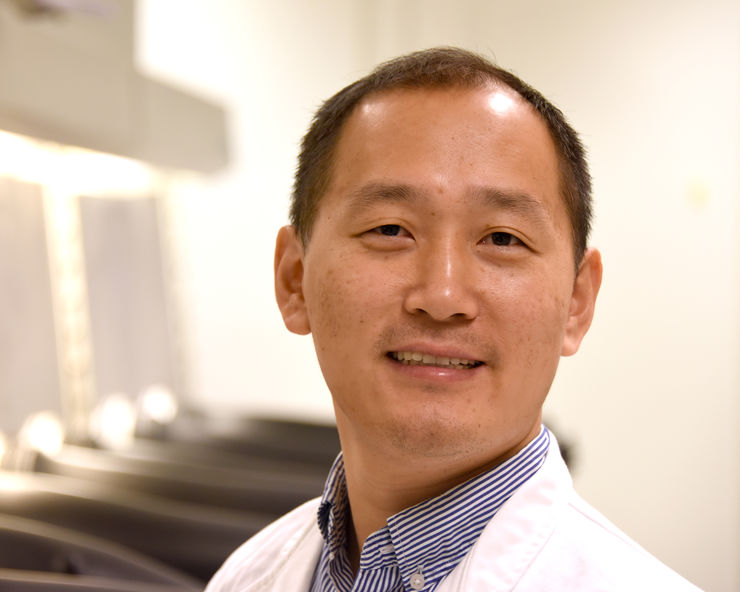 “One difference between Swedish and Chinese academia is that here mid-career researchers can coordinate large projects. In China, such responsibilities are usually given to more senior researchers”, says Feng Gao. Göran Billeson
“I am lucky enough to have great group members working with me. Our productivity partially results from the way we work in the group. I advise the members when they ask, but otherwise they work independently and help each other. They have a great deal of freedom, which I believe increases creativity. I had a lot of freedom when I was a doctoral student, and I learnt a lot from that”, he says.

When new doctoral students and postdocs are recruited, they bring with them expertise in new areas, which means that the research questions can be posed in a broader perspective. “I challenge my group members and also myself when we discuss our new findings such that we really understand what’s happening. This gives us a solid scientific basis for the results we can publish in prestigious journals.” 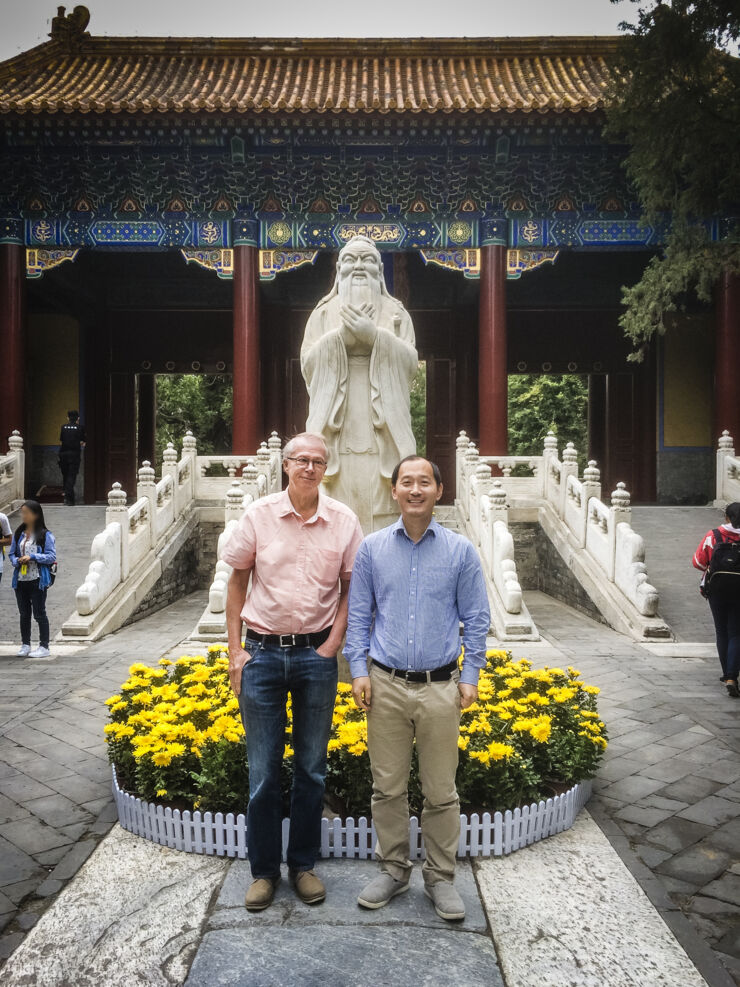 Olle Inganäs and Feng Gao in Beijing 2017. Privat/Private“Olle is an amazing scientist who always thinks out of the box and has an open mind. I have been very fortunate to have the opportunity to work closely with him and have him as my mentor”, says Feng Gao.

He is happy living in Linköping – a rather middle-of-the-road medium-sized town, though things are rather different at the moment in the midst of the corona crisis.
“Society here is well-organised, and I enjoy the healthy balance between family life and work. There’s plenty of time to spend with my family.”

LiU is highly multicultural, and English is the language of choice. Feng Gao hasn’t invested the time needed to learn Swedish well.
“But my daughter is good at Swedish, and she laughs at me when I try”, he admits.

He points to a challenge for the Swedish scientific community: the lack of support for young researchers.
“I was lucky, but today it’s difficult to progress from a postdoc and build up an independent research group. Change is needed also at the university level. Young researchers must be given the support to build up their own groups, which can bring completely new patterns of thought.” 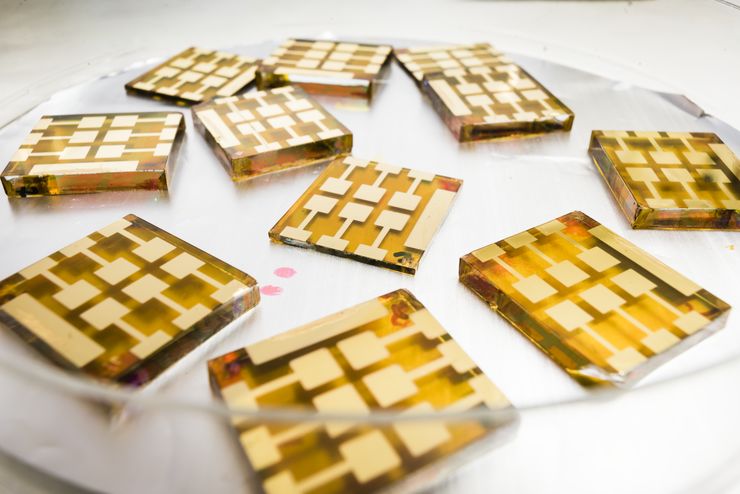 Thor BalkhedAccording to the major reference works, perovskite is the mineral calcium titanium oxide, discovered in 1839 in the Ural Mountains and named after mineralogist Lev Perovski. This mineral has a very special crystal structure, and has given its name to a completely new family of materials – the perovskites. They can consist of both organic and inorganic substances, and they have excellent optical and electronic properties. Perovskites are easy to manufacture as thin films in the laboratory.

The article is published in LiU Magazine, issue two 2020.