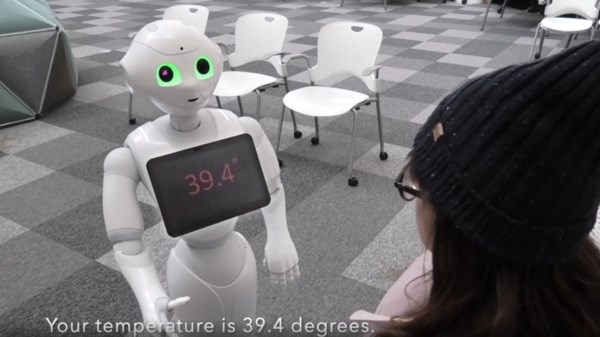 A robot that can measure the body temperature of people, for example in the waiting rooms of the hospital, is under development by researchers at Umeå University and the University Hospital of Umeå.

“We have previously used infrared cameras in our research on driverless forest vehicles, as a way of detecting people and avoiding collisions. Now we combine that research with our work with AI robots that talk to humans,” says Thomas Hellström, Professor at the Department of Computing Science at Umeå University, who is involved in developing the robot called RETHRO, Remote Thermal Robot.

Infrared cameras are a proven technology for measuring people’s temperature and are already being used at airports and train stations in Asia.

“But instead of a guard using an infrared camera to control people, for example in the entrance to a hospital, we want to develop a robot that not only finds people with fever, but also initiates a conversation with the person, and asks initial questions,” says Suna Bensch, Associate Professor at the Department of Computing Science.

The answers are then sent directly to the medical staff who can make a preliminary diagnosis, prioritize and decide how to best help the patient.

“Such a robot can also be used to inform about infection risks, by detecting how close to each other people stand or sit,” says Olof Lindahl, Professor and Head of Medical Technology, Research and Development (MT-R&D) at Region Västerbotten.

See how the prototype may work in meeting patients.

Replacing human contact with robots is often seen as a danger of robotization. But in this case, there are also obvious benefits. After all, a robot cannot be infected by patients, and if it is well cleaned, it cannot infect any human.

However, it is important that such an application is designed in an ethical way so that it feels safe and secure, the researchers say. For example, how should patient integrity be managed? And how should such a robot collaborate with hospital staff, and be integrated with the operations of a hospital?

The project is a collaboration between researchers at the Department of Computing Science at Umeå University and Department of Biomedical Engineering, Research & Development (MT-R&D) at Region Västerbotten. The project has already started with a feasibility study and a developed prototype. Depending on funding, the robot will be further developed, and then evaluated at the University Hospital of Umeå.